The colleagues from Dissens hosted the third meeting the EQUIX team get together in order to discuss the implementation of the project.

The main objective of this meeting was to set the common items that will be used in the test in the different countries in order to evaluate the base line of the attitudes towards Gender Norms among Youngsters,  and if there has been any change or not in the attitudes.  These pre and post-test will include some items from the original GEM scale created by Promundo. Apart from items from the GEM scale, each country will add their own items, adapting the test to the local social context.

The pilot phase was also discussed in order to share the experiences during the trainings and testing the methodology in order to improve the future implementation. The team also had a meeting with an expert on masculinities, named Till Bauman, who gave the team some tips when working with young men and  working on masculinities.

Another point of the meeting was to present the project website and start drafting the communication strategy that will include several target groups. Regarding the future activities and deliverables, the training about campaign was held so that the team can develop campaigns with youngsters. Moreover, there has debate about the status of the advocacy strategy and about the last event that will be held in Brussels. 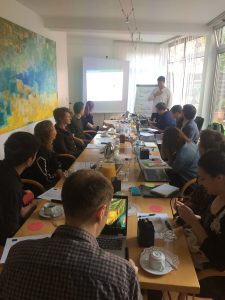